A month ago now, a group of users from the Villa Florida Civic Center visited us, as part of their cultural itinerary program.

As always, it was a pleasure to receive residents of the district. In addition, the building that houses the Villa Florida civic center is an old manor house from the 16th century, so that its history is closely linked to that of the Torre Bellesguard. Both houses have witnessed the social and urban development of Sant Gervasi-Sarriá.

In Gaudí’s time, its landscape was very rural. Several streets were streams surrounded by fields and vineyards, with a farmhouse or monastery, confirming the saying “Sarriá. Winds, torrents, towers and convents”.

During the Civil War, Torre Bellesguard was an orphanage and, in the mid-20th century, a maternity hospital. Not long after, Villa Florida became a Childcare School, so that these buildings became a place frequented by boys and girls. This year, thanks to their good conservation, they remind us of both the past and the future of the neighborhood and the city. Our story is not over, it just continues… 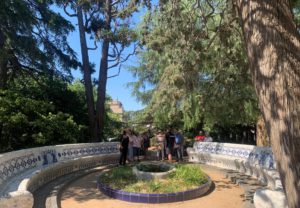