0
was successfully added to your cart.

Inicio » Blog » THE SUNS OF BELLESGUARD

THE SUNS OF BELLESGUARD

There are fewer days left for the arrival of spring. From now on, the periods of light will be extended and with them the opportunity to enjoy the sun. A good time to appreciate how Gaudí integrated the movement of the king star in the construction of Bellesguard, both metaphorically and physically, given the amount of interior light in every room in the house.

The entrance to the castle

This is Gaudí’s first image of the sun. A sun accompanied by several symbols around it, the four stripes of the coat of arms of the Crown of Aragon. The sun appears in the upper right side parallel to the date 1409, written to the left in Roman numerals. The date remembers the year in which Martin I married in second weddings with Margarida de Prades in the palace of Bellesguard. The sun represents the cultural splendor reached during the reign of this monarch called the Human for his connection with humanism, the philosophical and artistic movement of the Renaissance.

The sun, however, the architect also uses to symbolize the darkness that drags the sunset, that is, decay. As opposed to the sun we see a face with the eyes covered in the lower left part. Gaudí plays here with the meaning of Bellesguard, which, we remember, means “Beautiful views.” Its opposite is the deprivation of the sense of sight. Next to the symbol of darkness, in the lower right, we read 1909, when Gaudí finished his work at Bellesguard, indicating perhaps that, at his time, Catalonia could only weep the glories of the past, although another period of splendor was precisely the era of Gaudí himself, that is, Modernism and the cultural movement of the Renaixença (rebirth).

The central banks of the garden

The movement of the sun gives meaning to the symbols represented in the semicircular benches located at the center of the garden. Looking towards the house, in Bellesguard the sun goes out from the corner of the bank located to the right. In this bank we find two angels carrying the coat of arms of the Crown of Aragon that we have seen at the door of the castle. On the top of the four stipes stands the royal crown.

On the other bank, the one on the left, the two angels have the coat of arms of the House of Barcelona, the cross of Saint George, and we see the crown of the counts. As this bank is oriented towards the west, the image has been interpreted as the decline of the House of Barcelona. Let’s remember that Martin I was the last descendant of this lineage. Once again, Gaudí uses the movement of the sun to symbolize both the brilliance and the darkness of the changes in history.

The side mosaics at the main door

In the south-east bank of the Tower we can read in Roman numerals the date 1916, the year in which Domènec Sugrañes, one of the best collaborators of Gaudí, finished the works at Bellesguard. We also see a sun, which corresponds to the dawn. The image reminds us of the period in which the Royal Navy of the House of Barcelona conquered the Mediterranean. However, the ship shown on the bench carries a white sail, a sign of mourning and bad news at that time.

According to a legend, King Martin I, from the gallery of his castle at Bellesguard, saw how the battlefield of Sanluri returned to Barcelona. One of the ships unfolded the white sails, bringing good and bad news. His only heir, Martin the Younger, had won the battle but he had died a few weeks later. The succession to the crown was in danger. On the side opposite, at the northwest facade we find the sad outcome of this tragedy.

First, 1410, the date King Martin I died, without descendants. The silhouette of Montserrat represents Catalonia, behind it we see another sun, but it corresponds to the decline, as a symbol of the end of the House of Barcelona. After a period of two-year interregnation, which ends with the signing of the Caspe Commitment, a new king will sit on the throne of the Crown of Aragon: Fernando de Antequera, from the Trastamara’s Castilian dynasty.

The interior light of the house

In the Bellesguard Tower, as well as with other Gaudí projects, natural light is an element of great relevance. Gaudí’s control over the entrance of light is totally sublime. This aspect is one of the basic factors in Gaudí’s work, the control of good lighting and good ventilation in the interior spaces. Thanks to its architectural solutions, Gaudi emphasizes over the rest of contemporary professional companions. It is worthy of admiration as subject to the practical elements of the artistic aspects, when most architects will focus only on the artistic part and will forget the functional aspects of their projects

By way of example, the large three-dimensional stained glass window in the form of a star is a basic element for the entrance of light to the Tower, despite the first exterior impression. Indeed, Gaudí plays and deceives us by showing us a building with a facade lined with stones and with very narrow Gothic windows, giving the impression of being a dark building inside. On the contrary, the brilliant architect surprises us in the interior of the house with an excellent lighting entrance even in cloudy days. 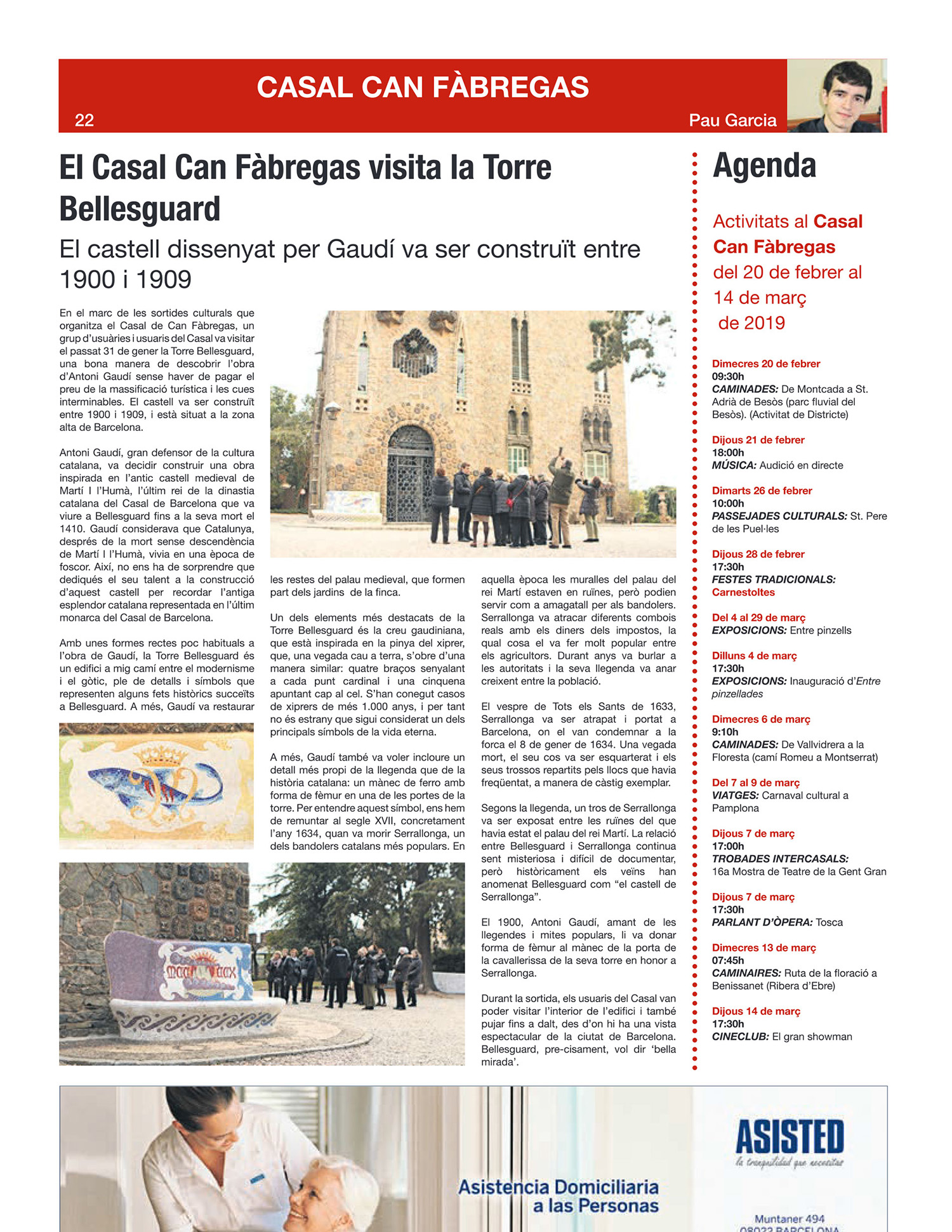 Casal Can Fàbregas came to visit the Tower Bellesguard of Antoni Gaudí.

Casal Can Fàbregas came to visit the Tower Bellesguard of Antoni Gaudí.

We use our own and third party cookies to prepare statistical information and show you personalized advertising through the analysis of your browsing, in accordance with our cookies policy. If you continue browsing, you accept its use.I agreeRead more