Did you know?: The Holy Trinity and a Mass 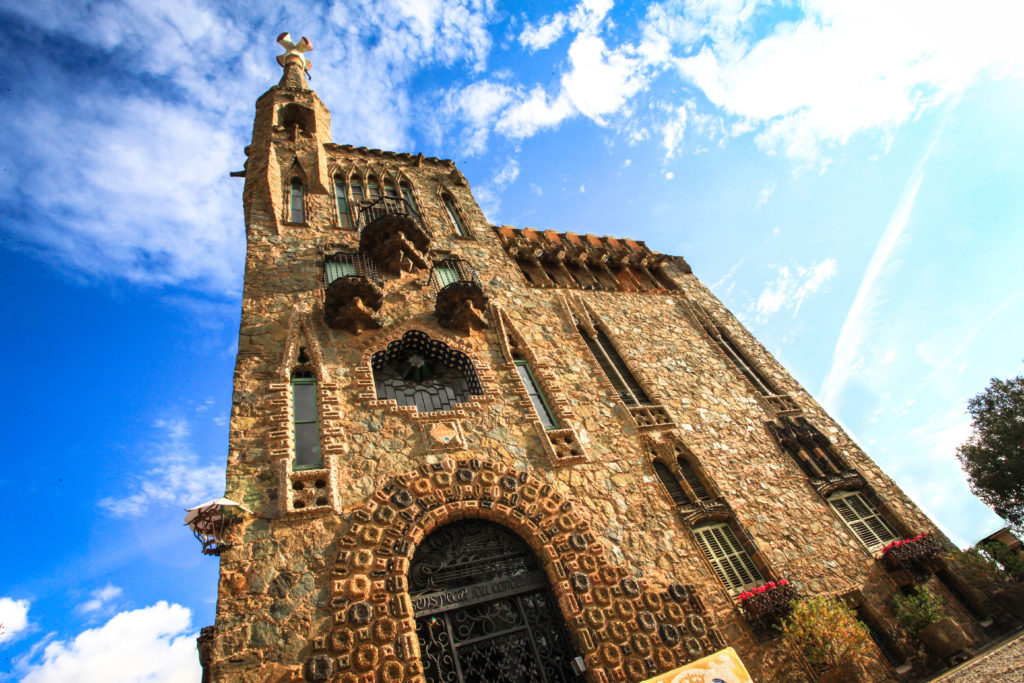 Last December 8 we began a series of three articles that we have called “The Triptych of the spiritual facade of Bellesguard”. We inaugurated it with the celebration of the Immaculate Conception. Today we will continue with another dogma, that of the Holy Trinity. Both were very dear to Gaudí. According to the definition of the Enciclopèdia Catalana, we are talking about a “Mystery, often considered as the fundamental nucleus of Christianity, according to which God is at the same time God Pare, God Fill and God Esperit”.

Regardless of one’s personal beliefs, this mystery represents one of the great inspirational motifs of European art, from the Middle Ages to the Modern Age. We find it in the Portal of Glory of the Cathedral of Santiago de Compostela, in the form of sculpture, or in the paintings of great painters such as Rubens, Dürer, El Greco and Ribera. Torre Bellesguard is no exception to this long iconographic tradition. Here Gaudí represented it figuratively with an original juxtaposition of three balconies, representing the Father, the Son and the Holy Spirit, respectively. Gaudí, moreover, places them just above a greeting of the Immaculate Conception on the main door of the house (see previous entry).

Next we will follow the imprint of the dogma of the Holy Trinity in the musical field and, as the masses are an important part of the Christmas tradition, we thought it would be appropriate to feel an example with a very special one: the so-called Mass of Barcelona, composed around 1360, that is, shortly after the birth, in 1356, of Martin I, the king who resided in Bellesguard. At that time, under the influence of the dogma of the Holy Trinity, everyone who was perfect had to be triple. Consequently, the musicians spoke of “tempus perfectum”, to refer to the measures of three beats, and of “tempus imperfectum”, to those that were not. The Barcelona Mass is an example. 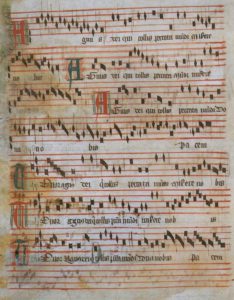 The aforementioned mass remained lost until 1925, when musicologist Higini Anglès found it in the Library of Catalonia. Although little known, it is a piece of great historical value because it is considered one of the first complete cycles of religious polyphonic music, along with other French masses (1). All of them are compositions from the 14th century, the century of Martin I the Humane.

The Barcelona mass, in particular, shows influences from the school of Avinyò, the town where the Aragonese Benedict XIII, better known as Pope Luna, received the papal tiara. Martin I visited him there on two occasions and, a few years later, the pontiff would return the visit to Bellesguard. Avignon was, at that time, an important bridge of cultural influences between France and the Crown of Aragon (2). It seems that it was Peter IV, the father of Martin I, who, after an official visit to the French city, began to renew the repertoire of the Aragonese royal chapel with compositions of the “Ars nueva”, the new style in which this mass is framed (3).

From the formal point of view, musicologists consider that this work is a collection of different works, or in other words, that its parts were not written to form a unit. Unfortunately, the name of the author(s) has not survived. The name of the mass refers to the fact that it is in this city where the manuscript is preserved.

What we do know is that Martin I -also known as the Ecclesiasticus- was a great collector of relics and religious works, as well as a patron of the arts, a tradition deeply rooted in his family. It would not be strange, therefore, that the monarch ordered to have a copy of the Barcelona Mass for his own chapel.

It is tempting to imagine King Martin I listening to the Barcelona Mass – in whole or in part – in his castle of Bellesguard, where there was a chapel and where he was visited by Pope Luna and other renowned religious personalities, such as St. Vincent Ferrer. The version that we will feel is in charge of Obsidienne, a group founded in 1993 by Emmanuel Bonnardot. For coherence with the theme that concerns us, we will feel the Sanctus. A part that, in the past, was known as trisagio, since the term “sanctus” (holy) is repeated three times at the beginning of the hymn, in honor once again of the Holy Trinity. The chosen album was released in 1995, on the Opus 111 label, under the title Barcelona Mass-*Song of the Sibylm. Relax and imagine a trip back in time, because Bellesguard, as you can see, has a long history. We would also like to take this opportunity to wish you a very happy new year.

(1) These other masses, besides that of Barcelona, were those of Tournai, Sorbonne, Toulouse and the most famous of all, that of Messe de Notre Dame, the only one of which we know the author, Guillaume de Machaut.