Did you know?: The Immaculate Conception at Bellesguard 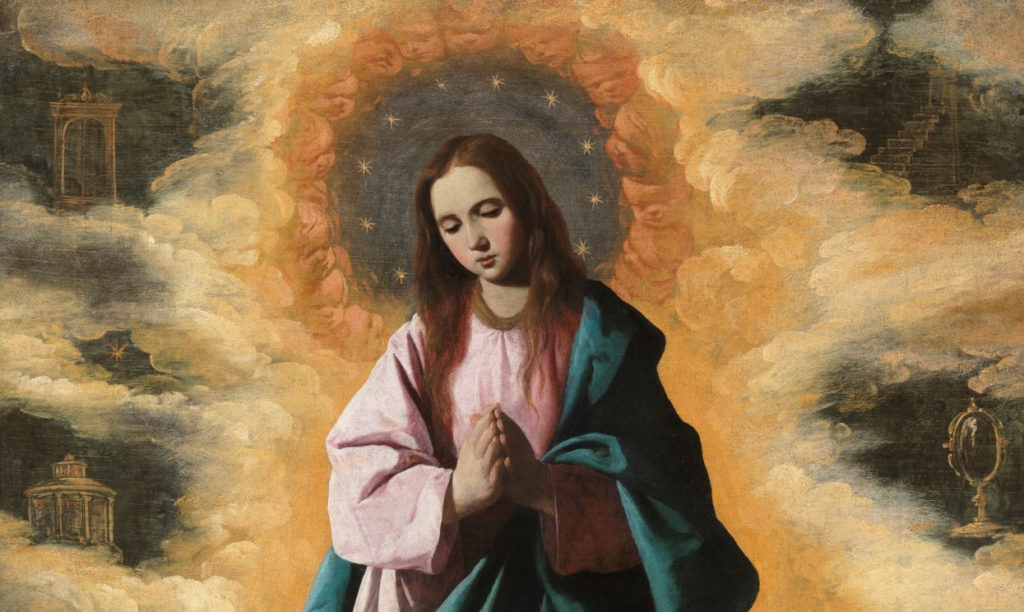 Today we publish the first article in a series of three that we have called “The Triptych of the Bellesguard facade”. A facade that hides different symbols and religious references. Little by little we will be discovering them, as if they were the windows of an Advent calendar. We hope you like them. Let’s start!

Every December 8 is celebrated the feast of the Immaculate Conception of the Virgin Mary, a feast deeply rooted in Catalonia for centuries.

Gaudí was a great follower of this commemoration. In many of his buildings we can find symbols dedicated to it (1).

In the Bellesguard Tower, Gaudí’s devotion to the Immaculate Conception is manifested in two ways. First, through a greeting, and then, with a symbol, the eight-pointed star.

The greeting – Hail Mary Most Pure, without sin she was conceived – is also found in the vestibule of the Casa Calvet, built shortly before. Both greetings are located at the entrance of the house. In spite of this similarity, each one is different, since the Bellesguard one is made with wrought iron and the one in the Casa Calvet, with paint.

By the way, the word Ave, in Bellesguard’s greeting, is written inside the lobes of the letter M for Maria. Which you can see in the photo below. 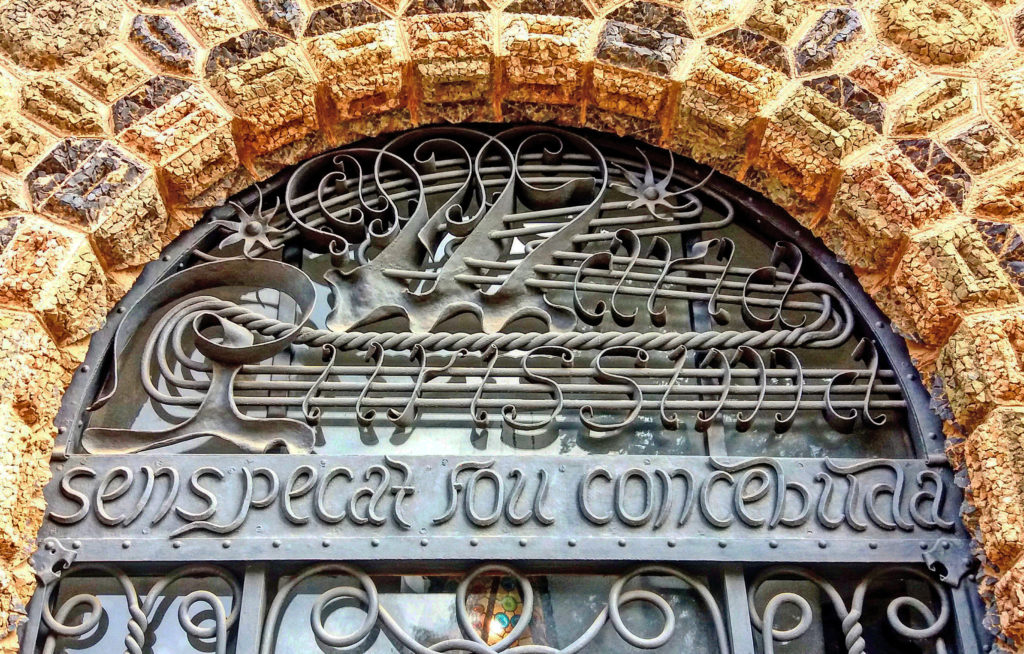 -Hail Mary Most Pure, without sin she was conceived- is the greeting located in the foyer of Torre Bellesguard. Image: Carles Salilla.

The second reference, the octagram or eight-pointed star, is a millenary symbol with a multitude of meanings around the world. In the Catholic world, it refers to the Virgin Mary. In the photo of the header, a painting by Zurbarán, we can appreciate the small eight-pointed stars that surround the head of the Immaculate Conception.

In Bellesguard we find it in the stained glass window of the facade of the entrance to the tower.

In relation to this symbol, Galdric Santana, director of the Bellesguard Research Group, notes that Gaudí achieves a rich symbolism (2), represents the morning star (Stella matutina) and the star of the sea (Stella Maris), as well as the mystical rose, three of the attributes of the Virgin Mary, faithful to the litanies lauretanas, a series of praises and supplications dedicated to the Virgin, very popular since the fifteenth century. On the other hand, the window would also be linked to another rose, the coat of arms of Reus (3), the city of the two builders of Bellesguard: Antonio Gaudí and Domènech Sugrañes.

These references are not only “mystical” but also historical. The devotion – and the cult – to the Immaculate Conception was already present at the time of the medieval castle of Bellesguard (4), but it did not become official until December 8, 1854. On that day, Pope Pius IX formally recognized the dogma of the Immaculate Conception through the bull Ineffabilis Manantiales.

In 1893, Joan Grau Vallespinós -the bishop of Astorga and great friend of the master- died while the Episcopal Palace of this city of León was being built. At that time, Bellesguard was owned by the bishop and, before his death, he made a will and gave the deeds of the land to Gaudí. The bishop’s body, coincidentally, was buried at the foot of the Cathedral’s Immaculate Conception, in a tomb designed by the architect himself. In 1899, Bishop Torras y Bages, also a great friend of Gaudí, founded the Spiritual League of the Virgin Mary of Montserrat (one of the benches at the entrance to the house shows the mountain of Montserrat in memory of this event). Among its inaugural members were Gaudí himself and Jaume Figueras, who commissioned him to build the Bellesguard Tower in 1900. The purpose of the League was to enrich the Christian life of its members and to promote the spiritual and temporal reconstruction of Catalonia. For Gaudí, devotion to the Immaculate Conception was mixed with veneration for the Virgin of Montserrat.

Devotion to the Virgin Mary in Gaudí’s time was easily visible in most towns in Catalonia and Spain. In the past, on the door of several houses, by way of welcome, it was customary to read the words “Ave María Purísima sinless conceived”, or a similar phrase, in Catalan or Spanish. It was, on the other hand, a phrase commonly used when entering a house or meeting someone (5).

For all these reasons, it is not strange that at the main door of Bellesguard we can read a greeting to the Immaculate Conception. What does occur differentially is a small element on either side of the letter M for Mary: a pair of eight-pointed stars, a symbolic coincidence that reinforces the link between the stained glass of the vestibule and the Virgin Mary, as we have explained above.

We invite you to come visit us and discover the other octagrams hidden in Bellesguard.

(1) The most recent is the star of the tower of the Virgin Mary to the Holy Family, although this is twelve-pointed. In the Pedrera, the architect of Reus even wanted to crown the facade with a sculpture of the Virgin Mary with Jesus and flanked by the archangels St. Michael and St. Gabriel. An idea that was never carried out, but which perfectly illustrates Gaudí’s Marian veneration.

(3) Op. cit., p. 133, note 8. “This rose corresponds to the rose of the Reus coat of arms, which historically was of 8 petals, with a geometry very similar to that of the stained glass, in the 17th century versions.” (…) and adds Galdric: “It should also be borne in mind that it has been considered that the coat of arms of Reus, achieves the heraldry of the keys of Sant Pere on the Rose, in relation to Pope Luna, that King Martin invited to settle in Bellesguard, the 1409, and that he was lord of Reus.”

(4) The kings of the Casal de Barcelona were great defenders of the dogma and the celebration of the Immaculate Conception, following the theories of the Majorcan theologian Ramon Llull. Especially the last ones. John I the Hunter and his wife, Violando de Bar, as well as his brother, Martin I the Humane, the king -we remember- who built Bellesguard. This devotion was maintained in the time of the following lineages of the Crown of Aragon and Spain, even becoming a matter of state in the seventeenth century. Consequently, it is rare the church without an image or picture of the Purisima, corresponding to different styles and eras.