Did you know?: The Star of the Three Magi

We reache the last entry of the Triptych of the spiritual facade of Bellesguard, which we started in December, with references to the Immaculate Conception and the Holy Trinity. It is, as we have seen, a façade loaded with symbolism, starting with its height, which, from the highest point of the cross to the ground, is 33 meters, the age at which Jesus Christ was crucified. Now, the symbol that occupies us today evokes his birth. It was at night, it was cold and some wise men were following a star…

After Gaudí’s death in 1926, the architect Josep F. Ràfols catalogued the master’s entire personal archive. Two years later, he published his first biography, and in it, we read that one of the most notable features of Torre Bellesguard is “the green and amethyst star that evokes the Kings of the Orient” (1). Consequently, the interpretation of Ràfols is, perhaps, the first known interpretation of the iconography of Bellesguard. It seems to be justified by the presence of an octogram, or eight-pointed star, in the oldest representations of the Epiphany, the official name of the feast day which celebrates the Adoration of Jesus for his sacred birth by the Three Magi, among other believers.

We see it, by way of example, in a well-known mosaic in the church of St. Apoloni in Ravenna, Italy, where these legendary figures are shown carrying their gifts for the child Jesus, with an octogram leading them. It dates from the 6th century and is considered one of the earliest images of the Epiphany (2).

We also find an octogram in the reliquary of a capital of the cathedral of Saint Lazare de Autun, in France, from the beginning of the 12th century. In this second work, the scene takes place shortly before the Epiphany. On their way to Bethlehem, two of the kings are asleep and the third is awakened by an angel who shows him the eight-pointed star. At the end of the 13th century, we still see the same symbol in The Adoration of the Three Kings, by Pietro Cavallini, a painting kept in Santa Maria del Trastevere, also in Italy.

The shape of the star of the Three Kings, however, will begin to be transformed at the beginning of the 14th century. Then, a genius named Giotto, will revolutionize the art world, prefiguring the Renaissance. He will also make a more subtle change. Instead of representing the sign that guides the Three Wise Men as a star, he will paint a ball of fire leaving a bright trail in the sky. This change was a consequence of the passage of Halley’s comet in 1301, a phenomenon that attracted the attention of all his contemporaries. The painting where he showed such a modern image is his Adoration of the Kings, from 1305, and we can see it in the frescoes of the Scrovegni Chapel, in Padua, Italy. Since then, the image of the star has not ceased to vary, as well as its possible explanation: comet, planetary conjunction, a

In any case, the form adopted by Gaudí at Bellesguard was the traditional eight-pointed star. The same shape that is sometimes associated with the Virgin Mary. Are these two readings contradictory? Not in any way. In both cases, the star leads us to the same place: in Bethlehem, the place where Jesus will be born. A coincidence that seems to reinforce another hypothesis. The base of the Bellesguard stained glass, in the form of three steps, could be the foundation of a manger that was never completed with the figurines characteristic of Christmas nativity scenes. 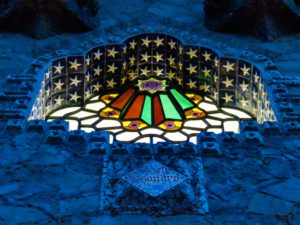 In short, the various interpretations proposed enrich the mystery around the Bellesguard stained glass. Josep M. Vall y Comaposada, the author -to date- of the only monographic book on Torre Bellesguard, comments that the stained glass of the eight-pointed star “is a unique decorative solution of Gaudí and is not repeated in any other of his buildings” (3). A highly symbolic solution. In fact, we have only seen two possible interpretations, but many more have been proposed. In another post we will talk about them. On the other hand, the stained glass is not the only place where we can see an octogram to Bellesguard. Where else there are eight-pointed stars…. Come and discover them personally. We are waiting for you!

(2) It should be noted that the star of the Magi is not always an octagram. For example, in the Aragonese Romanesque there is a scene with two superimposed seven-pointed stars. We can see it in the tympanum of access to the cloister of San Pedro lo Viejo, in Huesca: link. Today, this star is represented in a variety of forms, combining the iconography of the star and the comet.